A Hike to
the Top of
Mt. Allen

The hills above Malibu are a playground for those with an adventurous spirit and the desire to explore.

Bikers, hikers, equestrian – there is something for everyone there. The valleys, canyons, and mountains can truly take you away from everything. It sounds cliche, but in Malibu, it’s the real thing – you are so incredibly close to the city, but at the same time, so far, far away from civilization. 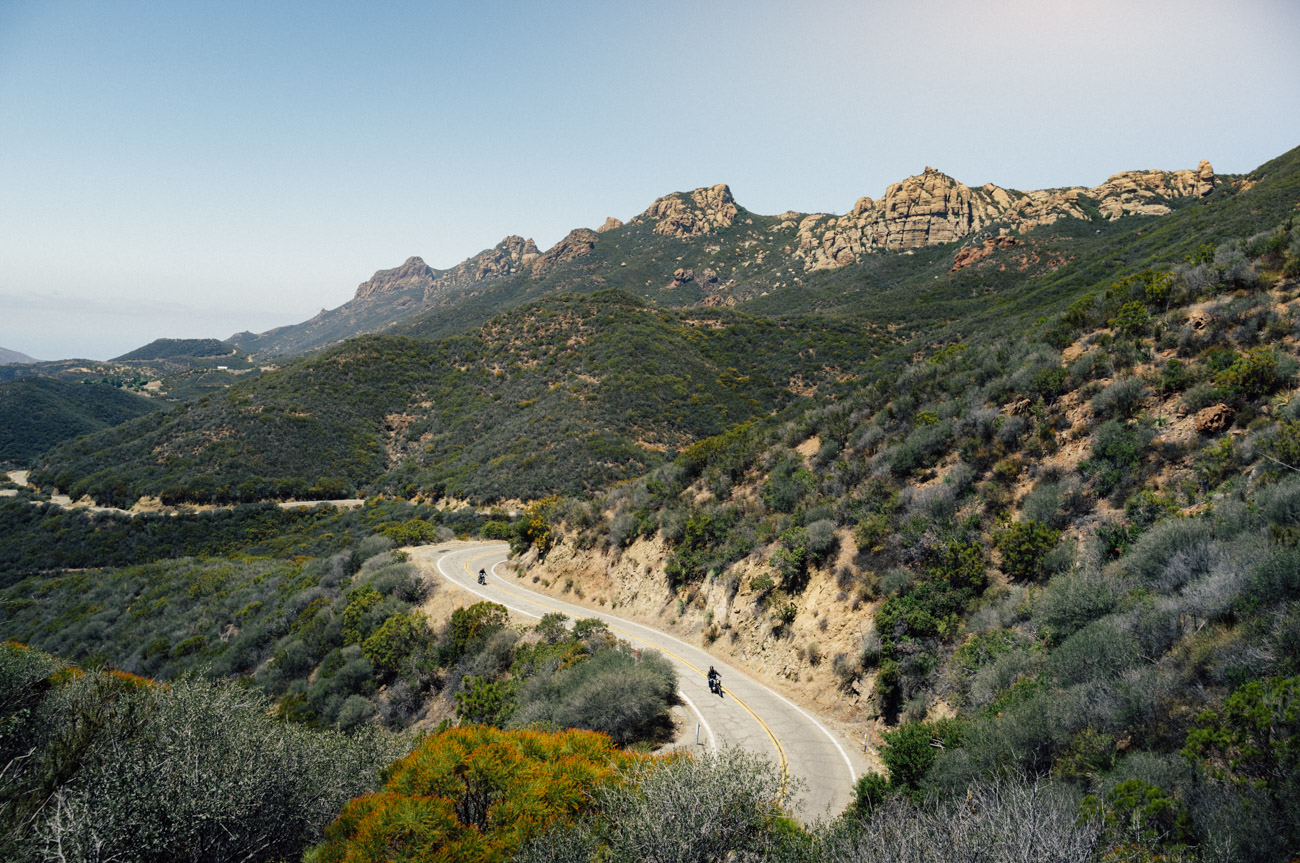 One great photo trip to enjoy is Sandstone Peak, also known as Mt. Allen. At 3,114 feet, it’s the highest peak in the Santa Monica Mountains. I’ve been out this way several times on the many mountain bike trails that criss-cross these hills, but I was excited to bring Gabe along for the hike up to this incredible spot.

From points north or south, make your way to Pacific Coast Highway and at the far North end of Malibu, head up Yerba Buena Road. As you leave the coast, the hills get more green as the sky gets bigger and bluer the farther you drive. Once you’re at the top of the hill, you can access the trailhead from a few different points. Look for the signs for the Circle X Ranch on your right, just over 6 miles up, and the main trailhead and parking area is on the left as you head up from the Coast. If that lot is full, there are also small turnouts alongside the road, with an additional lot ahead on the right. This area is popular for day hikers, so it’s likely you won’t be alone up here. Make sure you greet your fellow hikers on the trail. It’s a great way to meet folks and share the experience!

the most incredible vistas unfold before you, and new sights and sounds appear around every bend

From the trailhead, there’s nowhere to go but up. For those new to hiking, the 3+ mile round trip trek will most certainly present a challenge, while more seasoned hikers will most likely find the dusty, rocky and steep trail to be fairly straightforward. We came prepared with hiking shoes, wide-brimmed hats, water and snacks. Most of the trail is fully exposed to the sun with little shade – be prepared! With a 1500 foot gain in elevation, the trail is sometimes steep, but as you climb, the most incredible vistas unfold before you, and new sights and sounds appear around every bend.

Starting from the main trailhead puts you on the Backbone Trail, which itself runs 67 miles across the entire length of the Santa Monica Mountains. There’s so much to see as you head up this trail. If it’s not the rugged hillsides, it’s the tranquil blue waters of the Pacific. At several points, you get a glimpse of Echo Cliffs, and if you squint, you may see some climbers headed up or down this sheer rock face. Another view in the distance is Balancing Rock – a monolith boulder perched precariously on a hillside, defying gravity. 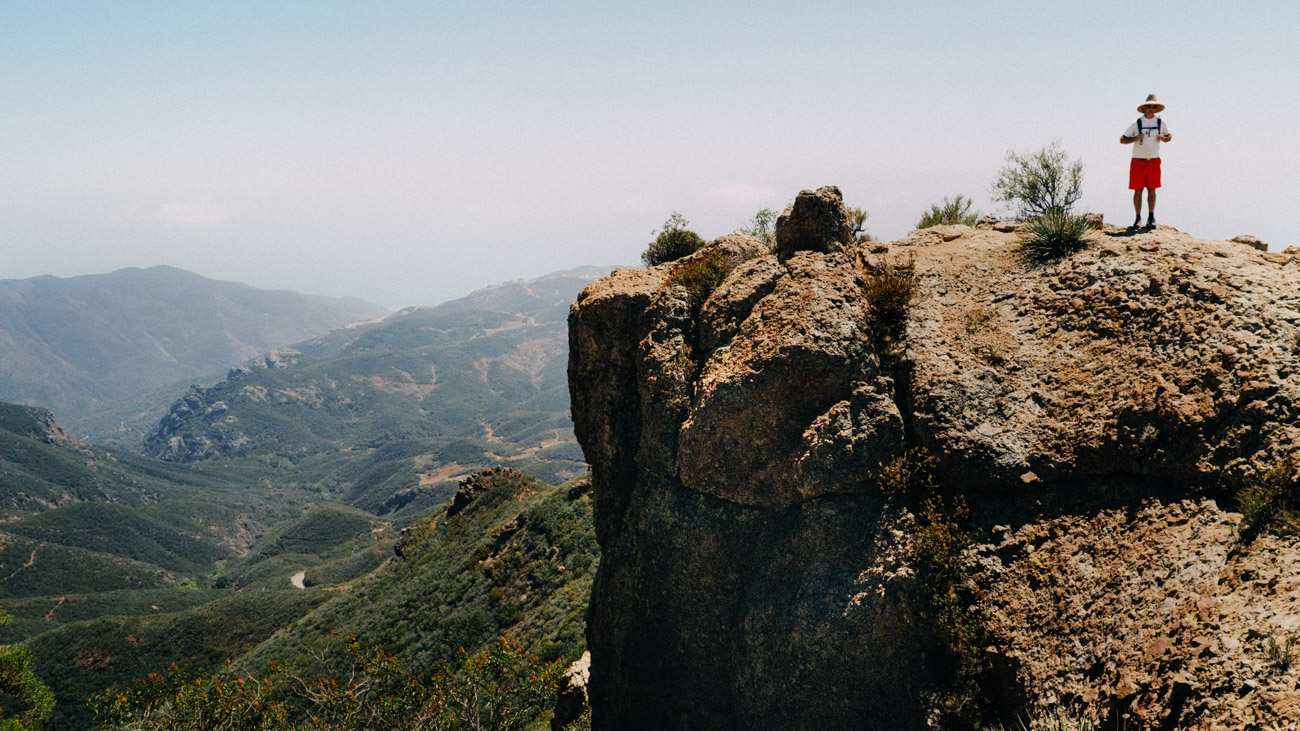 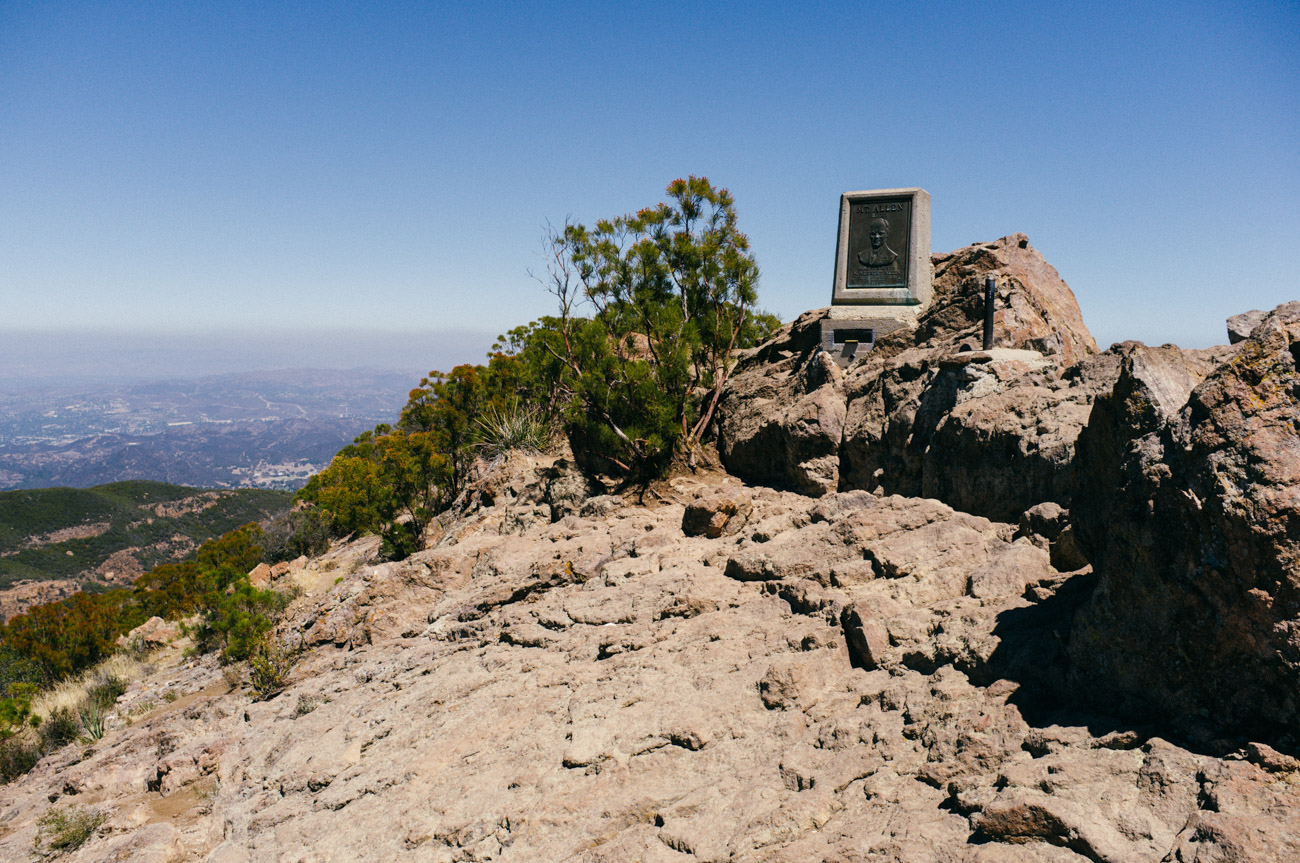 The marker atop Mt. Allen 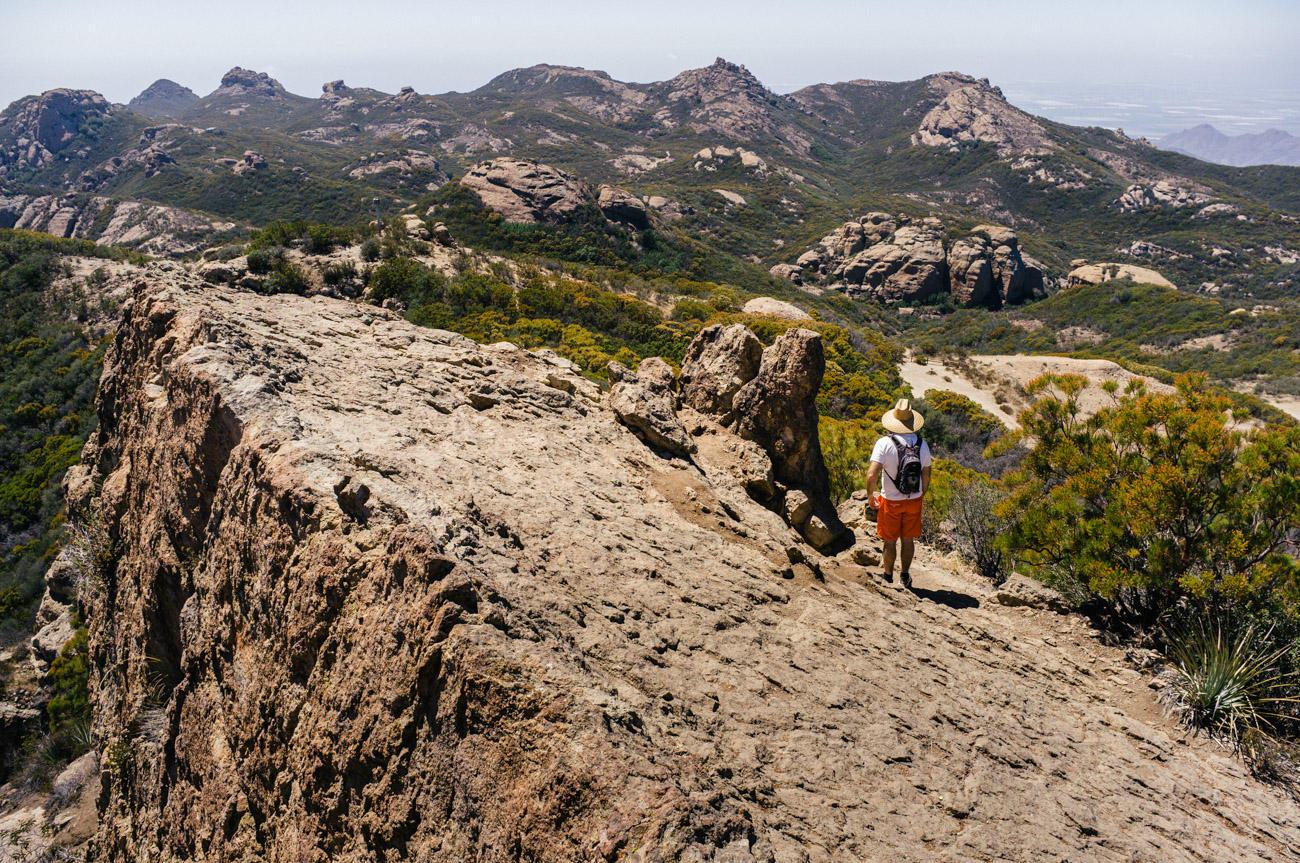 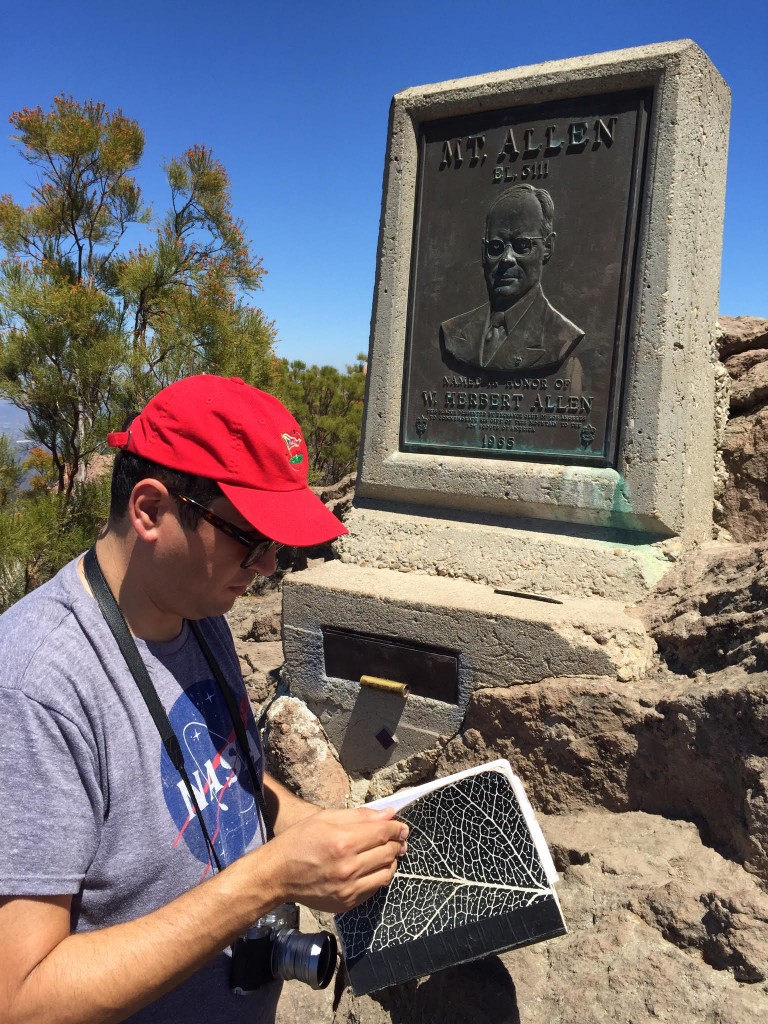 Gabe checking out the journal on the Mt. Allen summit

For a hike that’s twice as long as the Backbone Trail, head further up the paved road to the Mishe Mokwa Trailhead. This trail is revered by many as one of the “must do” hikes in all of Southern California. Its name gives the nod to the Chumash tribe who inhabited this area dating back to more than 13,000 years ago.

As you climb the Backbone Trail, some small spurs break off from the main route, but there are also plenty of signs to keep you on right path. Nearing the top, about 1.5 miles up, you’ll see a small sign to the left that points upwards to the peak. From here you leave the main trail, at first ascending a set of steps carved into the rock and hillside. The footing here is a little tricky, far more than any point on the trail so far. A series of small paths criss-cross this area, all of which lead to the peak. It requires that you scramble through some bushes and climb some steep rocks to reach the top. And once you’re up there, you’re really up there.

Now you’re on top of the world, with mountains, valleys and the road itself well below you. On a clear day, you can see as far south as Santa Monica and as far out as the Channel Islands. At the summit is a stone marker bearing the name of Herbert Allen, this mountain’s namesake. Mr. Allen was the former president and chairman of the board of the Title Insurance and Trust Company of Los Angeles, and a former president of the Los Angeles Council of the Boy Scouts of America. He donated the land for nearby Circle X Ranch where the Boy Scouts still operate a camp. In his honor, the Boy Scouts dedicated the marker, but since Department of the Interior policy prohibited naming a location in honor of a living person, Sandstone Peak remains the official name. 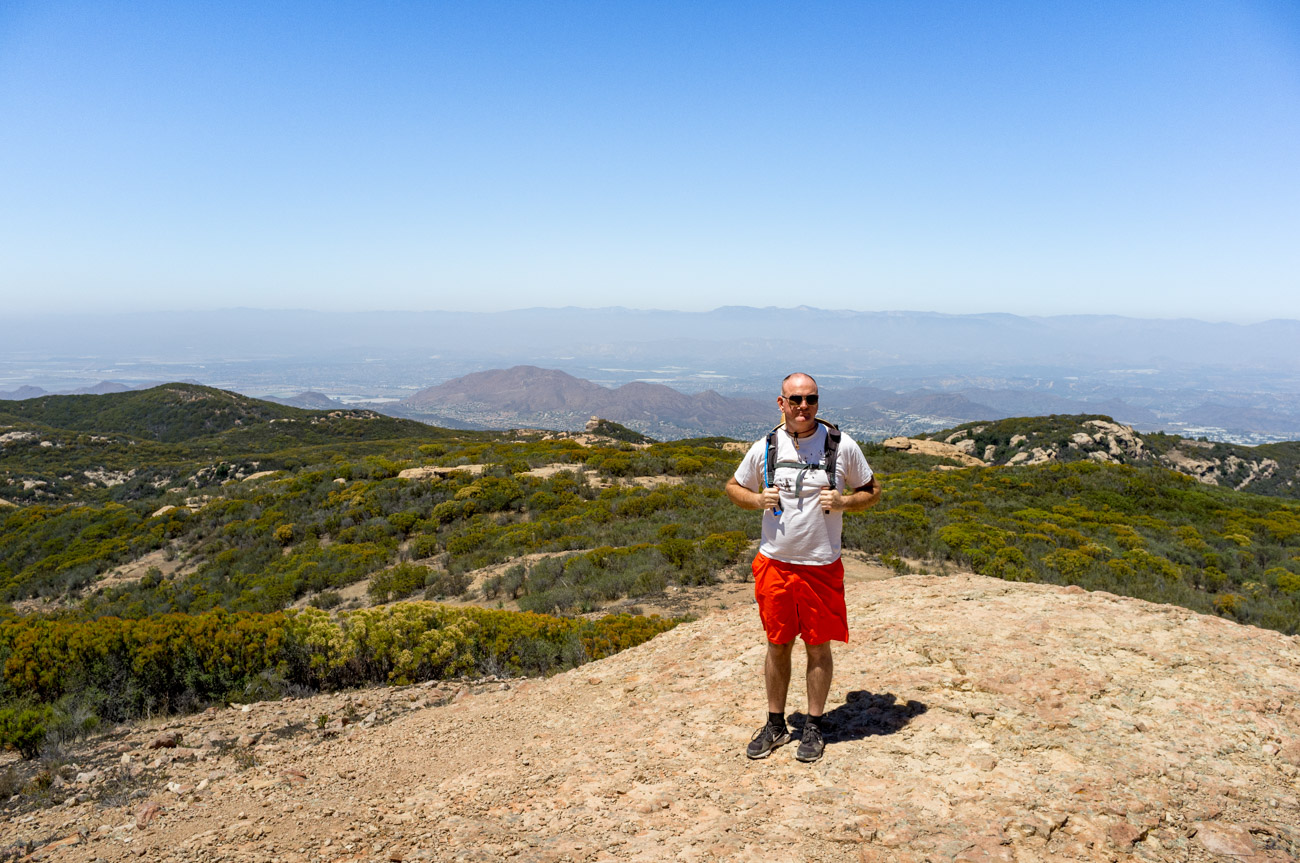 A Northeast view from the Mt. Allen summit 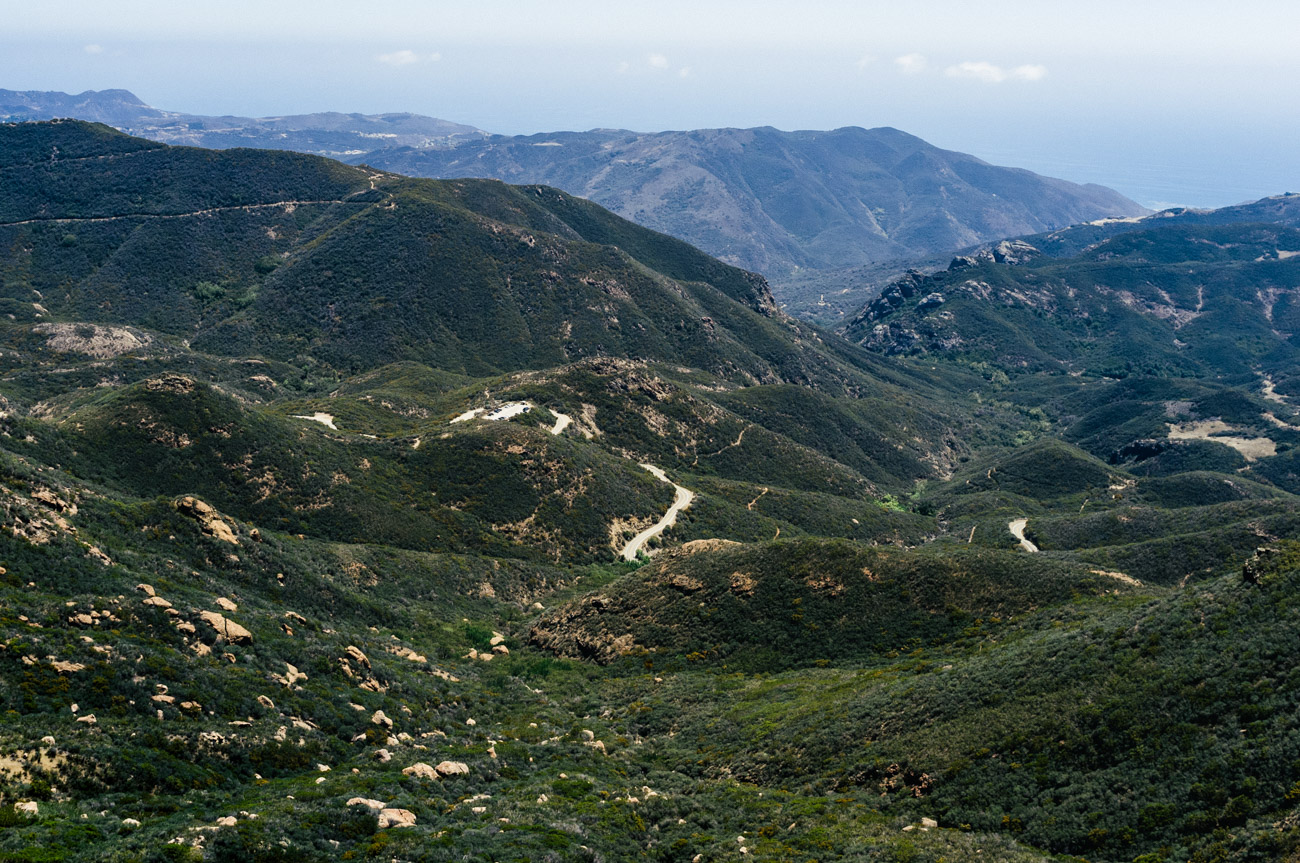 Dirt parking lot with bathrooms at the foot of the trail. 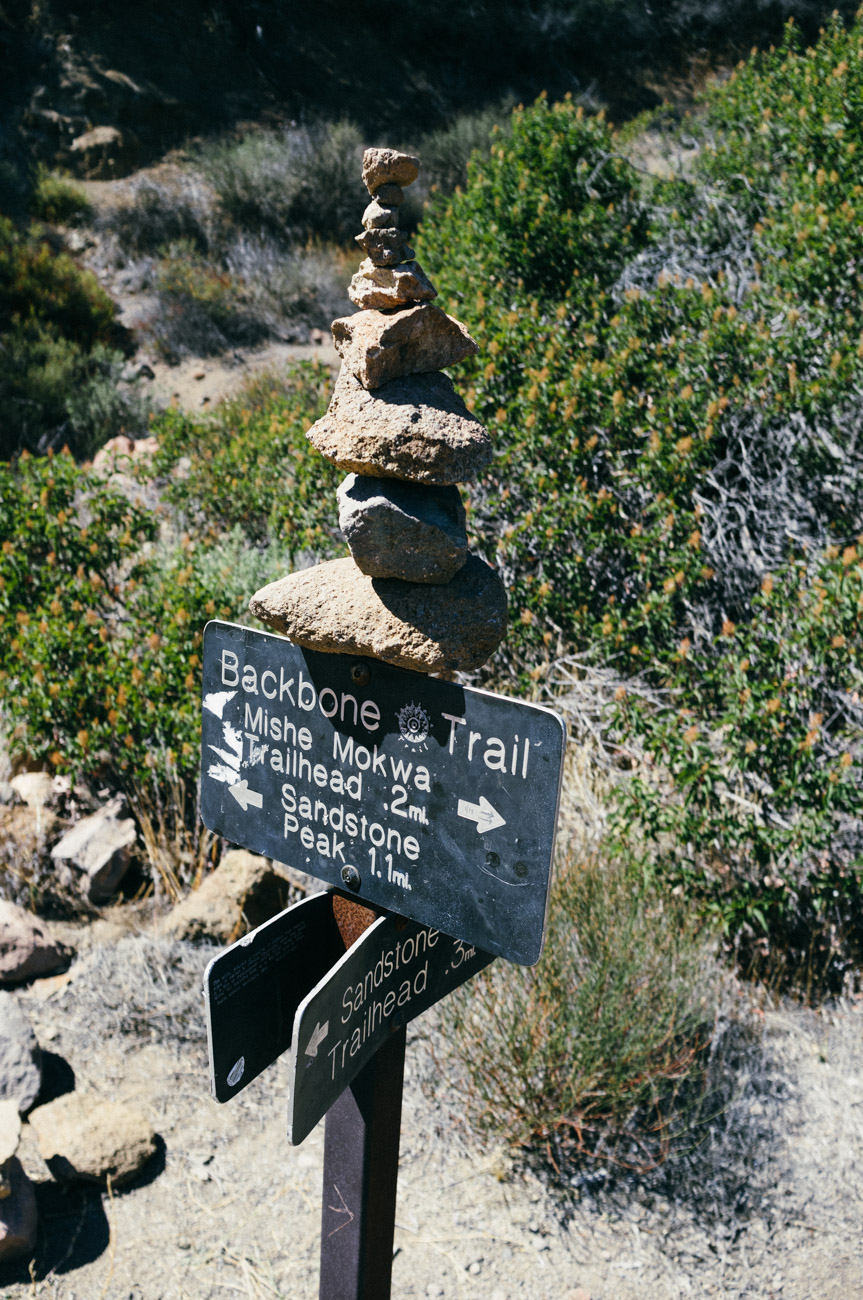 One of many signs along the trail

Inside the Mt. Allen marker is a notebook. Once you’ve made it this far, write your name in the book to let others know you’ve been there. Volunteers from the Sierra Club routinely check this notebook, and once full, they replace it, sending the old one to the Bancroft Libary on campus at the University of California, Berkeley.

It’s almost impossible not to get a great photo here, and we both did just that. There is so much to see – and with a 360-degree view, there’s plenty to photograph. All in, the trek up took around an hour, so we sat back and soaked in the view. There’s no reason to hurry once you’re up here. We sure didn’t want to leave, and you probably won’t either.

So while this wasn’t a terribly long or difficult hike, it was one that we both most certainly enjoyed, and we’re anxious to do again! We’re planning another trip soon – this time in the evening when we hope to photograph this stunning landscape with the starry night sky as the perfect backdrop.